St Mary's has a distinguished team of musicians led by the Director of Music, Richard Pinel, supported by the Organist, Richard Hills.

The principal act of worship on Sundays and on Solemn Feast Days is a traditional High Mass (a form of the interim rite) but with significant concessions to Vatican II and using the BCP readings. It seeks to achieve spiritual excellence by combining carefully thought out and well honed ceremonial with appropriately fitting music, combining traditional liturgical plainsong with settings of the mass, anthems and motets from a wide range of composers, from all musical periods.

The music staff attach vital importance to the integration of music and liturgy, with the former being emphatically the servant of the latter. To this end the selection and presentation of choral and organ music is undertaken with strict adherence to the celebration and lection of the day, together with the appropriate chant.

Much experience has been gleaned by the music staff over the years in shrine and parish churches, cathedrals and collegiate institutions. The autonomy afforded by this experience as expressed at St Mary's is greatly valued. This relationship is expressed joyfully in friendship with the congregation, and music of high quality is seen as a powerful binding force in this Eucharistic community.

The Via Crucis: the Stations of the Cross at St Mary's, Bourne Street

A meditation on the Stations of the Cross recorded on the St Mary's organ during Lent 2020 by Richard Hills. Two sets of Stations were in use at the time: our traditional set of fourteen stations, and a modern interpretation (with an additional fifteenth station) by the artist Michael Fletcher.

The parish has a music fund that supports an Organ Scholar, usually appointed for one year, which provides the opportunity for a young musician to have free practice on an excellent organ while learning the business of Catholic church music within the mass, especially the accompaniment of plainsong. The fine organ was built by Henry Willis & Sons in 1928 and underwent major restoration in 2005/6.

We are always interested in receiving expressions of interest from potential Organ Scholars. Please send a CV and covering letter along with the names and contact details of two referees to the Director of Music at office@stmarysbournest.org. 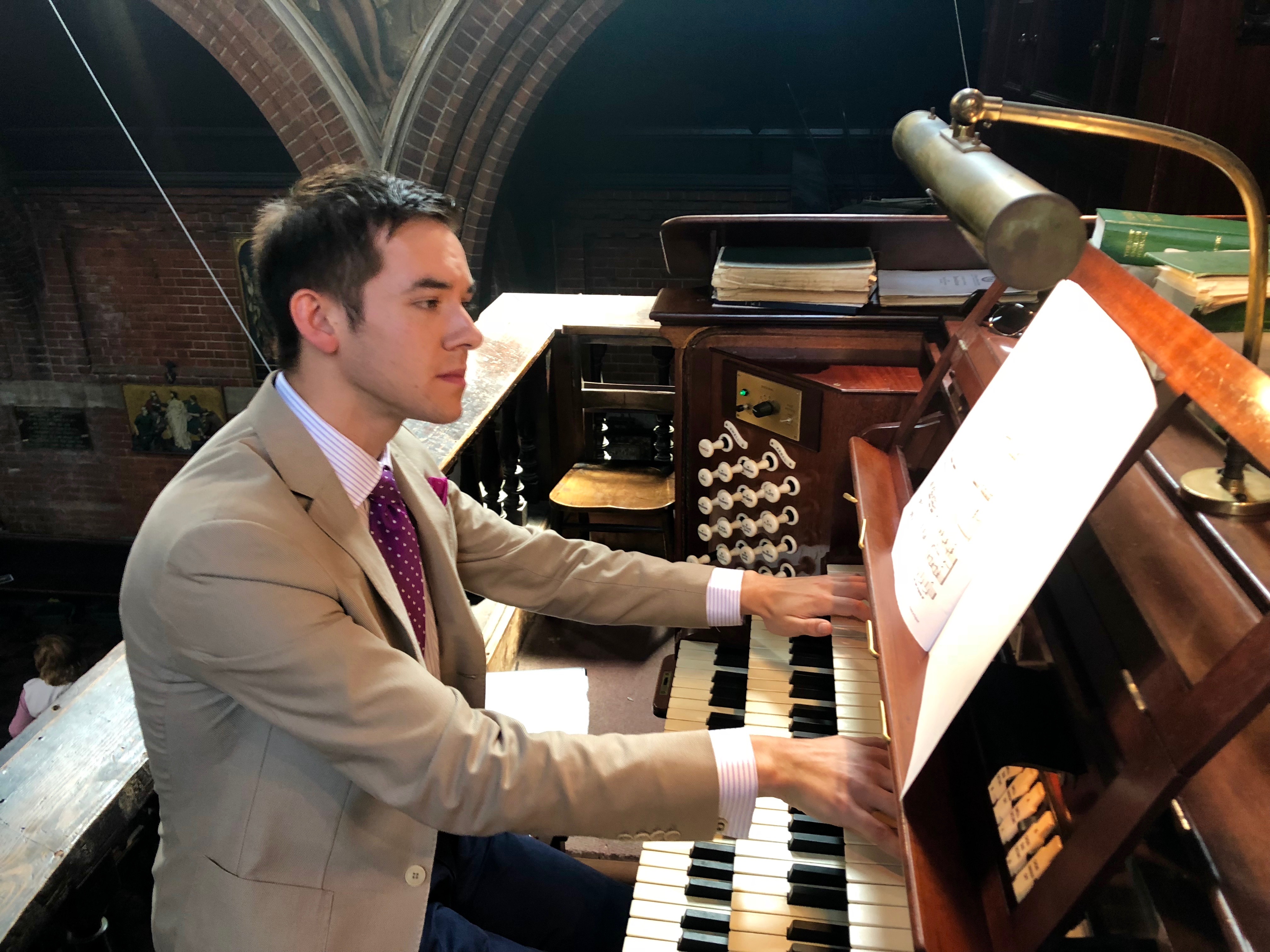 Sebastian Gillot at the organ of St Mary's

Our regular income has taken something of a hit over the course of the past 18 months, with the loss of many Sunday collections, so if you are someone who usually gives via the collection plate, and are not in financially difficult circumstances at present, we wonder if you might consider making a one-off or regular donation? Click the button below to donate with a credit or debit card via Give A Little.

The usual times of services during the week are below, but please check the Church schedule in the latest newsletter before making a special journey. Times of other services are also shown in this newsletter.